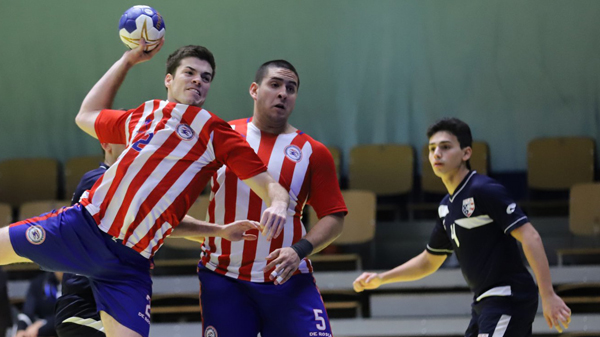 When Chinese Taipei opened their Kosovo 2019 account with a tight 30:29 victory over Nigeria, it effectively sealed their semi-final spot from group A as the third team, hosts Kosovo, were the group winners, emphatically defeating both sides.

It was the same scenario in group B with USA the dominant team and as group winners, the North American side face the Asians in the first of the U21 semi-finals today in Pristina.

USA’s goalkeeper Rene Ingram has been a key presence in goal for his side with the 2,00m player racking up 28 saves in his two matches so far, an overall save ratio of 42% and currently lying second in the overall table.

A dual threat appears in attack for America too with Amar Amitovic (16 goals) and Asaf Bengozi (15) second and third in the top three attackers – but they are followed by Ting His-Shing for Taipei in fourth place (13 goals).

“We just have to make sure that we are the best prepared to win the semi-finals,” said Taipei’s centre back Wu Peng-Wei. “We hope we can bring that feeling from beating Nigeria into the semi-finals.”

Semi-Final: Kosovo vs Paraguay – 19:00 hrs
Palace of Youth and Sports

Home side Kosovo go into their final four clash as the clear favourites after impressing in both their wins, against Chinese Taipei (31:23) and Nigeria (34:21). For Paraguay, it was less straightforward as their 32:19 win against Australia was enough to move into the semi-finals despite a heavy loss against USA (28:19).

Kosovo’s Drenit Tahirukaj is joint tournament top-scorer with 16 goals and that top position is no surprise with his team clearly leading the scoring statistics, on 65 goals.

“It’s the first time that a men’s team from Paraguay has been on a European court,” said Paraguay’s coach Victor Figueredo Trigo about the South American nation having both U19 and U21 teams in Kosovo. “This tournament is very important for us to see if we’re doing good work and if we are moving in the right direction so we can compare ourselves with teams from other continents.”

With the game throwing-off at 7pm on a Saturday evening, the Palace of Youth and Sports is expected to be full of home fans willing their team on to the final tomorrow.

Secondary venue for Kosovo 2019, the 1st October hall, welcomes an Africa vs Oceania clash with both teams looking to leave Europe with a victory in their last match.

Nigeria have the better record going into the match after narrowly losing 30:29 against Chinese Taipei in their group A clash which put paid to their semi-final hopes ultimately, while Australia suffered losses against USA and Paraguay.

Mohammed Anas leads the scoring for his Nigeria with 12 goals, while Jake Ljungberg has scored nine for Australia so far.